It has to start somewhere... 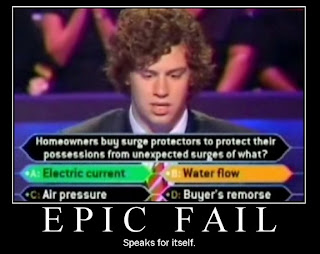 In my online travels, I come across travesties of scientific injustice. People that watch too much tv and read too little often find themselves proclaiming scientific evidence that will shake the foundations of modern understanding. However, it is always bullcrap of the highest magnitude. I am not going to sit here and do point by points, I am just going to post the ignorance in all of it's glory.

I present simply, "Science Fail". Actual living, breathing people posted the nonsense I will present, and expected others to take it seriously.

"--as the water builds behind a dam several hundred miles long, almost 4,000 feet wide and somne 175 meters deep, magma from the earths core must move in an opposing direction to compensate, and as it moves, it will cause the magnetic field to shift more--as the magma is forced in an opposing manner--outside the core of the planet, or so I believe--as one thing affects another--which affects another and so on."
Posted by Dirty Hairy at 11:15 AM